The document is a comprehensive analysis drafted by the People's Youth of Croatia (PYC) which emphasises phenomena considered to be the result of Western culture’s influence on young people. All of the youth activities that the PYC deemed to have been created under the influence of the West were also considered oppositional because they were at odds with the prevailing ideology. The paper lists and analyses the flight of young people to the West as a result of idolatry of the West; dissatisfaction with the regime or economic problems (since legal migration was largely prohibited until the early 1960s); debates about freedom and free initiative that, to the extent they proceeded, especially in Zagreb, were not desirable because they surpassed of the accepted framework; coverage of events in the West by the youth press, especially movie columns (Vie Giovanilli, Horizon, The Revue, The Film Journal), which in the opinion of the PYC was too exaggerated and idealized the Western way of life versus that under socialism; the reading of works by authors who considered the notion of freedom (Camus, Sartre) at the philosophical level; the spread of comics as a typical form of creative expression by Western cultures; the "hip" behaviour of young people (Western clothing and hairstyles, establishing “gangs“), the obsession of the youth with the Wild West and similar phenomena.

This PYC document, along with the records of other so-called socio-political organizations, was until 1995 a part of the Archives of the Institute of History of the Croatian Workers' Movement/Institute of Contemporary History. In July of that year, the archives were handed over to the Croatian State Archives (CSA), where they are kept today.

The archives are regularly used by the researchers for scholarly publications, which was the case for this report as well. 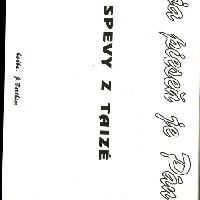 Songs from Taizé
Songs from Taizé were originated in 1982 in the Capuchin Church in Bratislava and spread on separate xerox prints. Songs were secretly recorded on tapes such as Zdravas Mária (Hail Mary) in 1987 and Verím, že je to možné (I believe it is possible) in 1988. Songs from Taizé were officially released in 1990 by Carmina Sacra. Katarína Horváthová, Pavol Kaločaj, Pavol Bulla participated in the realization of the songbook from the 1980s.
Citește mai mult Keston’s information about this image is somewhat limited. The original photo was taken by Friedensstimme, most probably in the year 1974, when a hand-made printing machine like this one was discovered in a house in Latvia and confiscated by the authorities. Four women, workers of the Initsiativniki Publishing House “Christian”, were arrested on October 24, 1974 for being in possession of this printing machine. According to an article published in the Russian journal Vestnik Istiny (No. 2-3, 1977), this kind of printing press could print 400 copies of the gospels during one working day. These Latvian women were Initsiativniki, a dissident wing of the Soviet Baptist community that emerged after a split in the church’s ranks in 1961. According to scholar Julian Birch, this movement was “an interesting and indeed unusual example of cross-national, or State-wide, dissent within the USSR. 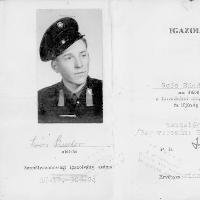 The distinctly unique group identity of the Hungarian veterans’ circle in Provence is visible in the fact that their members took an active part in both of the hottest armed conflicts of the Cold War: as teenage insurrectionists in 1956 Hungary, and a few years later as volunteers of the French Foreign Legion in the final phase of the devastating Algerian war. Due to much more powerful counter-forces, finally they lost both their fights; however, as the lucky survivors,  they managed to win the peace. Thus today they are among the few witnesses who have been given the chance to recall those troubling events that took many of their generational fellows, who died young or disappeared worldwide some 60 years ago.

A conservative estimate of these youngest recruits of the Legion, a few of them still underage at that time, is 500 among well over of 3,000 Hungarian volunteers total, who, following 1956 served in Algeria under the French tricolor and the red-green banners of the Legion. As a result of five years of archival and oral history research both in Hungary and France, more than the half of them, 269 members of the younger age group, have been identified by name and personal data. Finally, some two dozen Hungarian veterans were found in Provence and Corsica, and nine of them volunteered to share their memories with the wider public as the main characters of a feature length documentary film and a 500-page documentary book. (See Béla Nóvé’s film and book of the same title and subject, Patria nostra, published in late 2016.)

Even the first interviews and questionnaires of the veterans proved with shocking evidence how deeply and decisively their 1956 experience was etched in their memories. For various personal, biographical reasons, in the autumn of 1956 they all joined the protest demonstrations and the revolutionary unrest with great enthusiasm. Now nearing the age of 80, they still remember this time as their “baptism by fire.” The then thirteen-year-old János Spátay volunteered as a courier, passing secret messages sewed in a football from the isolated revolutionary troops across the bridges of Budapest that were blocked by Russian tanks. Fourteen-year-old Béla Huber from Sopron was the first to throw a hand grenade at the local headquarters of the ÁVH (the communist secret police); he continued to hide out in the woods along the Western border with other teenage boys for a month after the adult insurgents had all fled to Austria. Sixteen-year-old Gyula Sorbán took up arms on the first night at the siege of the Radio headquarters and for days was busy producing Molotov cocktails until he was gravely injured in the leg by a Russian tank grenade. Sándor Soós, a 17-year-old apprentice miner in Oroszlány protected the entrance of the New York Palace, a hotel and press center in downtown Budapest, with a light machine gun and only fled to the West with the last groups of insurgents one week after the second Soviet invasion.

He was the one, who, at the request of the researcher, described his 1956 memories in a twenty-page manuscript (the brief selection here is an excerpt), and then discussed his fighting experiences in detail on camera when visiting Budapest with László Eörsi, an expert of freedom fighter groups of 1956. His testimony was all the more appreciated by the historian Eörsi, since there are hardly any archival records left behind by the group that defended the New York Palace in Budapest.
Citește mai mult
76 - 80
«« pagina anterioară 1 ... 12 13 14 15 16 17 18 19 20 ... 24 25 pagina următoare »»