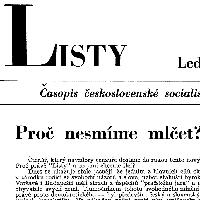 The magazine of the Czechoslovak Socialist Opposition, intended mainly for readers in Czechoslovakia, was published once every two months since 1971. This journal of political figures and publicists connected with the Prague Spring was created in 1970 in Roman exile thanks to the work of Jiří Pelikán, when two zero numbers with a head Forbidden Prague Literary Sheets was published. One year later, it began to come out periodically. Jiří Pelikán was originally the publisher of the magazine.

“Listy” was a left-wing opposition magazine, both domestic and exile, but they tried to remain open for authors of other political orientations. In particular, they included political studies, commentaries and analyses. Other inaccessible information from behind the scenes of communist politics, as well as small columns about the activities of communist parties in Eastern Europe (in the section “What Red Law Does Not Write”) were also published. From the beginning of its existence, “Listy” focused on political processes with opponents of the regime, and after 1977 they regularly reported on Charter 77, published committee documents to defend those unfairly prosecuted, and also regularly reprinted articles from domestic samizdat. The magazine had many authors who contributed to its publishing. Many articles were signed with ciphers or pseudonyms, and cannot be identified even today.

Scriptum.cz acquired this unique collection directly from the hands of Dušan Havlíček, who was one of the authors of the “Listy” magazine and together with his wife for many years compiled a set of registers for this important title. Dušan Havlíček only provided his collection to scriptum.cz and it cannot be found anywhere else, either digitally or in print.

Lithography "Couple behind a fence"

Recurrent motifs addressed by Roger Loewigs artworks are walls, rivers, fences, broken bridges, injured or dead bodies. These representations draw inspiration from the personal experiences of the Second World War, making a clear statement against any form of violence and repression.

The lithography 'Paar hinter einem Zaun' [Couple behind a fence], 30 x 42 cm, created in 1971, is the fourth sheet of the series 'Mein Mund webt ein Fangnetz für den Tod' [My mouth forms a catch net for death]. The series, including eight sheets, was created shortly before the artist's departure from the GDR. It accounts for the artworks created illegally during the period when the artist access to the printing machines was prohibited. 1971 it is also the year when his request to leave the GDR for West Berlin was granted. Thus one can account these series among Loewig's last productions while still in the GDR.
Citește mai mult

The collection has the largest group of liturgical church lamps in Europe. According to Alina Galvanauskienė, the head of the Museum of the 1863 Rebellion, many visitors are very surprised when they see so many lamps in one room. They show particular features of the collection, and of Fr Stanislovas' attitude towards material things. First of all, these items refer to religion, and collecting them was not included in the Soviet ideological understanding of what the cultural heritage meant. Secondly, the restoration of these lamps was done in a very particular way, without the meticulous and precise renewal of an old product, and not attempting to make something look as it did many years ago. The lamps have been restored by showing each part in a different colour. Thirdly, the main idea in the restoration was the process itself, rather than the restored object (an item). This meant that Fr Stanislovas sought to involve local people, visitors, members of the intelligentsia and craftsmen, in order to bring them together through activity, collecting and restoring things, and forming a community as a result of joint work. 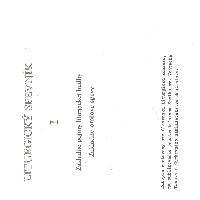 Liturgický spevník I
Liturgický spevník I. (Liturgical songbook I.) was originated in 1981 in the Catholic Church, it's editor and arranger was Juraj Lexmann. The liturgical songbook did not pass through the censorship of the church and was issued just semi-illegally.
Citește mai mult
Loose page and notebooks written in Lefortovo prison and the Mordovian camps
The papers of Andrei Sinyavsky in the Hoover Archives are very rich, amounting to 130 manuscript boxes and 1 oversized box.  As such, the curator of the Russia and Eurasia Collection at the HIA was hesitant to choose among all the possibilities, saying that it was far too soon for researchers to come to a consensus about what are the most valuable artifacts in this vast collection. For the COURAGE project, Siniavskii's notebooks written in pencil during his stay in Lefortovo Prison and during his trial in Moscow are particularly relevant, as they document Siniavskii's conflict with the Soviet authorities. These notebooks include materials used for several key literary works, including Golos iz khora, Progulki s Pushkinym, V teni Gogolia, and Ivan-Durak.
Citește mai mult
71 - 75
«« pagina anterioară 1 ... 6 7 8 9 10 11 12 13 14 15 16 pagina următoare »»