One letter in the collection was written by Kersti Kaljulaid, the current president of Estonia, who was a schoolgirl and the secretary of the Student Scientific Association at the time. The letter is one of the most restrained in the collection, as some of them are very emotional and even angry. In her two-page letter, Kaljulaid considers the potential dangers to the living environment. Unlike many other letters, Kaljulaid does not touch on the national question in her letter, although like some other writers, she demands a referendum on the plans for phosphorite mines.

The letter is handwritten, and has a few corrections, which means she probably did not write a draft. It was written on February 28, a few days after the relevant episode of the ‘Panda’ television programme.

It is interesting that Kaljulaid does not herself remember ever writing the letter, and assumes that it was the result of a recommendation by members of the Student Scientific Association.

The letter was published in the Estonian weekly newspaper Eesti Ekspress on 5 April 2017.

This is a typewriter letter consisting of 2 pages in extended tabloid format. The document was written in German on 25 November 1965, and since the Draganović’s handwritten signature is lacking, we may assume that it is a copy of a letter which Draganović wanted to store in his archives/personal papers. The original of this document is available at the Pontifical Croatian College of St. Jerome in Rome, and the copy is in the Croatian State Archives. The material is available for research and copying and is located in registry no. 2, under number 6.2.

The German Social Democratic politician Dr. Wenzel Jaksch (1896-1966), was the president of the German Foundation for European Peace Questions (Deutsche Stiftung für Europäische Friedensfragen). Draganović wrote him a letter in which he explained the need for publishing his book on the Bleiburg tragedy of the Croatian people. Draganović said that the book will contain considerable information about the crimes of the Yugoslav communist regime unknown to the world public. He stated that he planned to publish the book in three languages and he asked for financial support from the German Foundation for European Peace Questions, presided over by Wenzel. The letter testifies that Draganović was in the final stages of preparing his book, which was completely unacceptable to the communist regime in Yugoslavia and whose publication the government sought to prevent. This document is important because it explains the underlying intention of the creator of the Krunoslav Draganovic collection: the publication of a book about the Bleiburg tragedy.

In this letter, Mihajlo Mihajlov asks Edward Kocbek to join the initiative to establish the first free magazine that would not be under the surveillance of the Yugoslav Communist Party. Mihajlov was the head of the intellectual circle in Zadar as a young Russian literature professor who advocated the liberalization of the communist regime. Knowing that Kocbek was an exceptional intellectual authority and that he was in a certain opposition to the authorities, Mihajlov considered him a suitable person for the journal he intended to initiate, which was supposed to advocate pluralism and democracy.

This is a public letter from Mihajlo Mihajlov to President Josip Broz Tito written on July 15, 1966. He argued that his initiative to establish a “legitimate oppositional ideological, political, social, cultural, democratic, socialist magazine, Slobodni glas”, did not in any way violate the laws and Constitution of Yugoslavia (Mihajlo Mihajlov Papers, box 12).

In the period of limited “liberalization” and move away from the Stalinist legacy, Mihajlov tried to convince Tito that his initiative had the requisite legitimacy. Mihajlov believed that the party monopoly in the political and cultural sphere was a remnant of the Stalinist past and contended that the League of Communists could not have an exclusive monopoly in the construction of a socialist society.

Furthermore, he informed Tito of the preparations for the establishment of a periodical in Zadar in August 1966, which should be the core of a future social and political movement. At the end, he warned him that the success of the Zadar initiative would serve as the main evidence of “whether the League of Communists is above the law and constitution and whether Yugoslavia is the private property of the communist party“ (Mihajlo Mihajlov Papers, box 12). 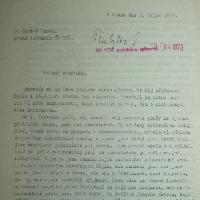 This letter was the second letter by the Czechoslovak historian and dissident Milan Hübl addressed to Gustav Husák, the general secretary of the Central Committee of the Communist Party of Czechoslovakia; the first letter from February 1970 remained unanswered by Husák. Hübl could not comprehend how Husák, who had been a political prisoner in the 1950s and lived through the suffering of a communist prison himself, could restore the authoritarian regime after the repression of the Prague Spring in 1968 and persecute his opponents. In his letter, Hübl defends the former representatives of the reform movement who were stripped of their jobs for political reasons, and denounces the violation of human and civil rights in the country. “Where are the people,” he writes at the end of the letter, “who falsely charged you, interrogated you, judged you, imprisoned you and later tried to prevent your rehabilitation? You know better than anybody else which functions they hold now when you have to meet them, or the functions which you have to appoint them. You are in the snake-like grip of your former jailers.” This letter was one of the factors that resulted in Hübl’s imprisonment in 1972. Gustav Husák’s reply from 25 October 1970 is also part of the Milan Hübl collection in the National Archive.