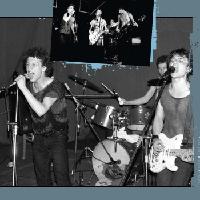 Materials on Polish independent rock scene, documents, 1980s
Documents from surveillance, investigation reports, censorship protocols, song lyrics and photographs - all those materials were created by the State Security in the 1980s during its investigation into the rising punk and rock movement in Poland. Due to the rising pressure from the authorities to document the non-conformist behaviours, the investigation reports are often very detailed.
Those materials are dispersed among different bureaus of IPN all over Poland.
Citește mai mult 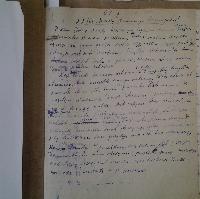 Matulaitis' letters to the presidium of Academy of Science

The handwritten letter from Matulaitis to the Academy of Sciences. In the letter, he criticises the Academy and the Institute of History. The letter (written in 1950) reflects very well the situation of Lithuanian historians during the late Stalinist period. Matulaitis, who spoke out about the need to research the history of the Lithuanian nation, came under pressure, was accused of ‘bourgeois nationalism’, and was dismissed from his job. 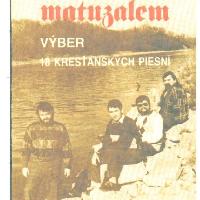 Matuzalem – výber 18 kresťanských piesní
Matuzalem – výber 18 kresťanských piesní [Methuselah – A Selection of 18 Christian Songs], magnetic tape and audio cassette, 1983, samizdat. Within the congregations of the UBB, the recordings were distributed in pirate copies. After 1989, a selection of the songs of the Matuzalem band was released on CD.
Citește mai mult 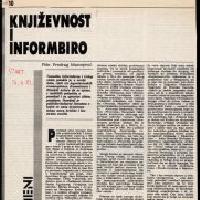 “Literature and the Cominform” is a newspaper article written by Predrag Matvejević (Mostar, 7 October 1932 – Zagreb, 2 February 2017) in which he critically reviews the breaking of the taboo on the Tito-Stalin Split (Yugoslav-Soviet Split) in 1948 and the Goli otok prison camp, and their analysis in Yugoslav literature, theatre and film in the early 1980s.

The review was published in magazine Start on 24 April 1982. It was founded by newspaper company Vjesnik on 29 January 1969 as a semi-monthly automobile magazine. In the period 1969-1972, when it was edited by Andrinko Krile, such topics were soon left behind, and the magazine focused on interviews about topics avoided in other magazines, and by the mid-1970s it became a magazine that covered politics, culture and the media, to which the most prominent Croatian journalists and intellectuals contributed. Krile was removed from his post as a member of the Croatian Spring, and it was assessed that Start had “succumbed to the base impact of the West and was a part of the Westernisation of Croatia.” According to Božidar Novak, after the Croatian Spring was suppressed, the magazine was rigidly censured, and until the July 1973 it was obliged to pay the so-called “trash tax.” In the period 1973-1980, under editor Sead Saračević, it acquired a new form and journalistic expression. Topics like so-called high culture were added, the works of the world’s top artistic photographers were regularly published, and a prominent place was accorded to feuilletons on political and historical themes. In the period 1980-1987, under editor Mladen Pleše, the magazine focused on new topics such as rock and roll and it highlighted the writings of social analysts and covered sensitive domestic policy topics. This put the magazine in a difficult position, because the political leadership maintained strict watch to ensure that the policy of “With Tito after Tito” was not violated. Political pressure continued when liberal and critical politicians and scholars began to speak in the magazine’s pages. The magazine continued to come out until 22 June 1991.

The article described above, like many other articles published in Start encompassed in the collection, are available for research and copying.

This 12-page meeting protocol of the Ukrainian National Council is an important historical artifact. it was signed in 1919 by Ivan Horbachevsky, a renowned chemist and professor, who was born in the Galician province of Ternopil, but spent most of his adult life outside Ukraine. This document was produced by the Ukrainian government-in-exile, which was comprised of individuals who fled from the Bolshevik revolution and lobbied for Ukrainian independence from the outside. It predates the establishment of the Soviet Union in 1922 and is a byproduct of the tumultuous period most often referred to as the Russian Civil War. Former imperial subjects articulated many differing political projects and visions of the future in the wake of the Russian Empire’s collapse. Among them were the Central Rada and the Ukrainian National (or People's) Republic, which after the fall of the Romanov dynasty lobbied for greater autonomy within the framework established by the Provisional Government. Once it became clear that the Bolsheviks had no intention of honoring that arrangement, they declared the independence of the nine southwestern most provinces, which they referred to as Ukraine.

This piece hints at the breadth, depth and variety of materials found in the Zina Genyk-Berezovska Collection at the T.H. Shevchenko Institute of Literature in Kyiv. As with most private archives, her collection developed organically and is comprised mostly of her own work as a literary scholar. However, Genyk-Berezovska and her husband were also integrated into a vibrant Ukrainian émigré community in Prague.  Therefore, Genyk-Berezovska’s collection extends beyond personal papers to include materials from the larger community. There is a subsection in her archive with the title “Documents relating to the cultural life of the Ukrainian community in Prague,” as well as material relating to a number of prominent community leaders from the early 20th Century, like Ivan Horbachevsky. As a result, many surprises await scholars and researchers who plan to work with this collection. Among the materials are a list of interned officers, officials and Cossacks from the archive of Petro Krytskyi, a former colonel in the Ukrainian National Republican army. His papers also have documents relating to humanitarian work of Ukrainian organizations in Czechoslovakia from 1939, and his own personal documents--IDs, passport, directives--from 1914-1919. In the files labeled as the Ivan Horbachevsky Archive, one can find photographs of Horbachevsky himself as well as the Ukrainian community in Prague from 1924, letters written to Professor Horbachevsky in the years 1920-1945, as well as an appeal to Ukrainian "brothers and sisters across the ocean" drafted by the UNR government-in-exile in 1919.