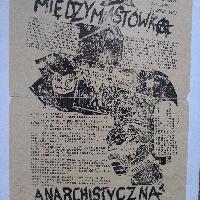 Anarchist Intercity poster
The Anarchist Intercity (MA – Międzymiastówka  Anarchistyczna) was a Polish net of anti-authoritarian groups and milieus. It was initiated in 1988 by members of The Alternative Society Movement and Freedom and Peace movement, that exhisted before. Among MA’s members were also activists of Totart, Orange Alternative, and other collectives and youth organizations of alternative-anarchistic leanings. Soon, in 1989, most of the members decided to transform this loose communication network into a structured organization. The decision was also made to change the name: initially to the Federation of Anarchist Intercity, and later to the Anarchist Federation (the latter is still active).

The poster, hanging on the wall of the office of prof. Barbara Fatyga, is a testimony to the beginning of the integration of dispersed anarchist environments. It is a collage of photographs, sketches and text. Collage technique was very popular in the third-circuit publications as a gesture of artistic freedom, aimed to startle the readers accustomed to linear reading of text. The poster’s slogan “Anarchists of the world, unite!” connotes revolutionary ambitions of the movement. Textual parts refer to the critical definition of the state but also the existential, rather than strictly political dimension of freedom. That is another reason why the poster is characteristic to the Polish anarchism of the 1980s as it combined political, cultural, and philosophical issues.
Citește mai mult
Anderman, Hanna. Minus 1, 1970s. Photo series
The photographic series entitled "Minus One" was created by Hanna Anderman (alias Anna Musiałówna) in 1970s. It was not published in the official press as it broke taboo about abortion in Poland. It might be considered as a symbol of a part of everyday life in socialist Poland that the authorities did not want to show to wider audience.
State politics towards women's reproductive rights varied in the socialist times. After the "Khrushchev Thaw", from 1956, the termination of pregnancy was possible in the situations of not only medical conditions of woman or fetus, but also hard living conditions of pregnant women. However, the abortion was not discussed publicly until the 70s when Polish sexologists started to publish their books on sexuality, procreation, and contraception. The debate about termination of pregnancy concentrated on the fact that due to low social awareness and accessibility of contraception the number of abortions, especially those performed in the unsterile and unofficial conditions, was too high. At the same time, the wider public was not exposed to bare documentation of the act of termination of pregnancy itself, which is the case in Musiałówna's photographic cycle.
In order to gain access to the hospital performing the termination of pregnancies Musiałówna had to use her best capacities as researcher and reporter and it cost her months of preparations. She photographed the procedure in a hospital and showed the medical utensils, figure of white-clad doctor, drops of blood and silhouette of a fetus. The photographs were bluntly showing the very core of the preparations for procedure, yet at the same time, as they were black and white, they did not shock with drastic images of blood. It is a very interesting cycle, combining together the sensitivity and craftsmanship of a photographer with a very important social issue.
Citește mai mult
Aniela Mieczysławska Raczyńska's correspondence with Jerzy Giedroyc, 1957-1992
Aniela Mieczysławska Raczyńska began collaborating with Jerzy Giedroyc's Literary Institute in the late 1940s. The two knew each other since the opening days of the Second World War in 1939 when Aniela and her husband Witold Friedman Mieczysławski, Polish diplomat, landed in Bucharest where Giedroyc served as the secretary of the Polish embassy in Romania. While in the US, she organized fundraising events for Giedroyc's press and Kultura review. The collection contains 7 files and hundreds of letters exchanged between Mieczysławska and Giedroyc from 1957 to 1992. It casts a broad glance on contacts, collaboration and animosities between Polish émigré circles in Britain, US, and France and provides the critical evidence of discrepancy between Jerzy Giedroyc's milieu and the "Polish London" mobilized around the Government in Exile. The bone of contention was the relationship with Polish People's Republic. While Giedroyc consequently built bridges between diaspora and the country, taking into consideration political changes, cultural trends, and literature and philosophy created in socialist Poland, the London émigrés viewed themselves and their institutions as the only guardians of Polish political and cultural tradition, culture and national identity. The correspondence documents and tracks down Aniela Mieczysławska Raczyńska's gradual conversion to the 'London' camp and Jerzy Giedroyc's disenchantment with London exiles. It also contains fascinating perspectives and detail on the social life of Polish political and cultural elites in exile.
Citește mai mult 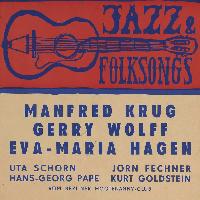 Announcement Jazz & Folksongs, 1967
In the middle of the SED campaign against Anglicisms, the popular regular event “Jazz-Lyric-Prose” was scheduled again on the Berliner Volksbühne. It as now specifically billed as an evening of “Jazz & Folk-songs” with well-known artists like Manfred Krug, Werner Sellhorn, Eva-Maria Hagen, and Gerry Wolf. After this announcement, angry culture officials demanded to re-do the whole programme within a week. And, in fact, on March 4th, 1967, the “Come and Sing”-event took place with performances of traditional battle songs by, among others, the Erich-Weinert-Choir of the National Army. The campaign also resulted in the Hootenanny-club being renamed Oktoberklub and becoming the flagship of the FDJ-song movement.
Citește mai mult

Announcement of a working day

This item is a typical announcement of a regular work day of the Noor-Tartu (Young-Tartu) movement. Announcements which were usually placed in educational buildings and hostels were an information channel to recruit people for work days. Anyone who saw an announcement was free to join a work day. The Raadi cemetery, which is mentioned in the announcement, especially its one part – Old St John’s cemetery – was one of the main areas of the work of Noor-Tartu.

This announcement itself was simple, and made with the means that were available. However, the announcement is still remarkable due to the big letter K in each corner of the paper. It is a hint at the former name of the movement – Kodulinn (Hometown) – , which was used until the spring of 1981. The movement only changed its name because the Tartu Komsomol organisation deliberately named its new organisation for school students Kodulinn in order to cause confusion.

The announcement belongs to the core group of the former movement. Like the entire collection, this item has not attracted wider attention, which is also the intention of the current operator of the collection. It is possible that it will be used for research after the collection is given to an institution.