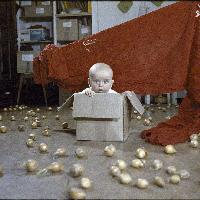 Activities with Dobromierz, photo series, 1972-1974
As soon as their son was born, Zofia Kulik and Przemysław Kwiek started “using” him in their artistic experiments.
There are over 900 photographs from the years 1972-1974 where the newborn is composed into spatial-visual settings with everyday objects, most often in the private apartment of the artists.
On one occasion he is placed in a baking pan circled with a cutlery ornament. Another time he is sitting in a metal bucket in a sink or is looking with keen interest out of the toilet bowl. The artists arrange around their son circles and patterns made of onion, lumps of ice, or the books they are reading at moment (Wittgenstein's Philosophical Investigations).
These arrangements often feature the symbol of the communist state, i.e. the red banner. But the images also reveal the material misery of the décor and furnishings, the poverty of the Polish People's Republic, magnified by the material paucity of the hackworking artists.
By writing about the “use of their child in art”, Kwiek and Kulik signalled that they were aware that employing their child as a prop or a component of a work of art was controversial. As one of the contemporary commentators noted, their actions were “equally methodical and instrumental.”
The set-ups of the photographs are by no means incidental. Inspired by academic lectures, the artists wanted to translate the “mathematical and logical operations” to visual actions, and discover methods of doing analogous actions in their own field.
Revealing the poverty of their daily life was also interpreted as related to “the ideological dilemmas o Kwiek and Kulik, whose leftist ideas were too radical for the conformist party apparatus.” The entire project was seen as an attempt to “translate the experience of being a parent, being bound by the bureaucracy, and being an artist at the mercy of «people's» government into the language of art.” (Adam Mazur). 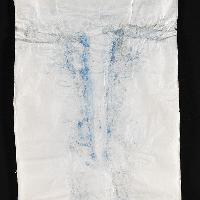 The work of Adriena Šimotová that is in Jindřich Štreita’s collection is one of the many large-scale paper works that the artist has created since the 1970s. This is a body print imprinted in several layers of paper, highlighted with a blue pigment. Like the Polish sculptor Magdalen Abakanowicz, Simot formed her own body with touch. In many of her works she has attempted to wipe out the difference between the creator and his work. She wanted a physical gesture, such as a print of the body, the face or the limbs, to literally be incorporated into the work. Therefore, the traditional canvas was replaced with fine laminated paper or linen sheets. The paper, which symbolized vulnerable and sensitive skin, layered, crackled and jerked directly on her body or the bodies of her friends. Printed bodies and their torso became the symbol of a man wounded during the ‘normalization’ period of the 1970s and 1980s.

According to Jindřich Štreit, this work of Adriena Šimotová is the most valuable work in his collection; the estimated price is more than half a million euro.

Before the first demonstration held by the organization in May, 1976, the idea of an advertisement, which was originally intended to be very short, was changed when the members succeeded in contacting Csaba Bázsa, who was working at the famous advertising agency Ogilvy & Mather. Together with him, they wrote a response to a propaganda article praising the Ceaușescu regime in the New York Times, which was then released by the Times. This propagandistic response, which was written by a Romanian Fulbright Fellow, infuriated the young people so much that they decided to write a more serious article in which they would announce the demonstration. In this framework, Csaba Bázsa took the risk of committing himself professional to the promotion, which was worth about $12,000. As this fact was disclosed at the demonstration, the campaign was successful. In other words, after the demonstration, a much larger amount was gathered than the rate which had to be paid to the agency and the paper. In addition to encouraging people to participate in the demonstration in front of the Romanian United Nations Mission, the article discussed the provisions that led to discrimination against minorities in Romania (scarce opportunities in language education and in language usage, falsification of historical data and statistics, confiscation of cultural archives, inability to make contact with relatives, and the fragmentation of minority communities). Then the article provided information concerning the obligations regarding the human rights as laid down in international law and in the U.S. constitution, on which the Romanian government infringed. The article ended by calling on the U.S to take a stand in support of human rights. It appealed to Congress to withdraw Romania’s Most-Favored-Nation Status in order to exert pressure on Romania to improve its treatment of minorities. In addition to raising awareness in the United States, the article called for donations of money and other forms of support. One of the reasons for the success of the campaign was probably that the advertising professional with whom the organization worked pulled out all the mention in the preliminary draft, which was written Bulcsú Veress, Jenő Brogyanyi, László Hámos, and his wife, of “Transylvania,” replacing it instead with Romania. In addition, it listed important violations of human rights not only with reference to the Hungarian communities, but with reference to all minorities in Romania.

The work files (score: ÁBTL 3. 1. 2. M–37304. “Mátrai”) contain the reports which were submitted by agent István Konkoly (code name “Mátrai”), who was a Catholic priest and later served as Bishop of Szombathely (1987–2006). Konkoly became an informer in 1959, not by principled conviction but under pressure from the state. He gave information to his case officers. In the 267-page dossier, there are no pieces of information which members of the state authority could not have gotten from other agents. One-third of the dossier is about the fact that “Mátrai” did not go to the compulsory meetings, the second third is about the fact that Konkoly did not give any reports, and the last third is about well-known, public information on members of the clergy.

In July 1983, Lantos submitted a long report to the secret police entitled “Experiences, Facts and Tendencies.” In this report, Lantos analyzed the political processes that were taking place, the behavior of the dissent students and the oppositional, anti-régime ideas circulating at the Karl Marx University of Economic Sciences (Marx Károly Közgazdaságtudományi Egyetem, or MKKE). He concluded that the intelligentsia was in crisis. According to Lantos, the reasons behind this were the decline of economic and political-ideological life and the lack of proper political education at the university.