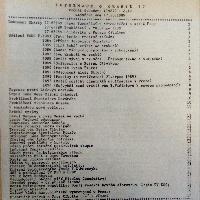 Title-page of samizdat Information about Charta 77
Title-page of the nineteenth issue of a samizdat called "Information about Charta 77" containing various articles about dissent in Czechoslovakia. This samizdat was published by the "independent editorial board of signataries of Charta 77". Charter 77 was an informal civic initiative in communist Czechoslovakia from 1976 to 1992, named after the document Charter 77 from January 1977. Founding members and architects were Jiří Němec, Václav Benda, Ladislav Hejdánek, Václav Havel, and Pavel Kohout. Spreading the text of the document was considered a political crime by the communist regime. After the 1989 Velvet Revolution, many of its members played important roles in Czech and Slovak politics.
Citește mai mult 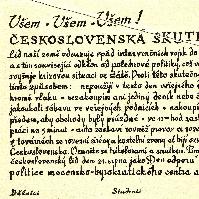 The Movement of Revolutionary Youth (HRM) was a predominantly student group with a radical left orientation that was founded at the beginning of December 1968 and that stood up against the upcoming Normalization until it was broken by the State Security during the winter of 1969 to 1970. Members of the HRM organised intense activity ahead of the first anniversary of the August occupation when they wanted to mobilize people against the Normalization regime. They published several leaflets for this occasion, one of them being the leaflet “To all – to all – to all!” which was signed by “workers, students, intelligentsia” and that urged non-violent protests on 21 August 1969, such as to boycotting public transportation, the press and shops. Pavel Šremer and Radan Baše from the Movement, and in cooperation with a printing trade union in Prague, saw to the printing of 200-thousand small leaflets. Initially, poet Jaroslav Seifert was asked to write up the text of the leaflet by the students. He thanked them for their trust but he declined their request arguing that they would manage to write the right text themselves. The final version was written collectively under the supervision of Petr Uhl. The whole event was finally called the Black Coffee Operation after two men in the printing trade union, Černý and Turek, and also as an allusion to the statement of the First Secretary of the SED Walter Ulbricht about the “coffee sediment of intellectuals in Prague”. The leaflets were also distributed beyond Prague, predominantly in North Bohemia and scattered by an engine driver, who was an acquaintance of Pavel Šremer, and his colleagues. 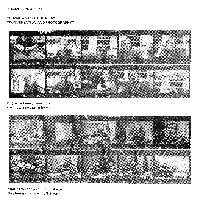 In 1978, Tomasz Konart invited Tomasz Sikorski to have a talk about independent galleries. The condition of the talk was that both participants had to take ten photographies of the interlocutor. The very photographies are the only evidence of the conversation. Also, the time of the discussion was strictly fixed to 30 minutes.
The documentation of the action Conversation and Photography was published in the catalog of the P.O. Box 17 Gallery. The catalog was edited by both Sikorski and Konart in 1979. It was made of the loose pages of A4 format. One of the pages showed exactly the action carried on by Konart. The work is a proper example of both the ephemeral nature of the neo-avant-garde art and its intellectual ambitions to analyze its own status. 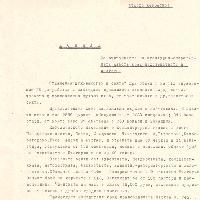 Top Secret
Top Secret! A Report on the State of the Operative Work among the Clergy and the Sects.


The report is dated March 15, 1958, signed by a major general who was head of the Third Department of State Security. The original is stored in the archive of the "Commission for the Disclosure of Documents and Announcing Affiliation of Bulgarian Citizens with the State Security and the Intelligence Services of the Bulgarian People's Army", commonly called "Commission for Dossiers" (Comdos) in Bulgarian.

The report of 15 typographic pages is a report on the work of a special section "Clergy and Sects" at the State Security on the "development" and the observation of the "enemy elements in the Catholic and Orthodox clergy, the Protestants, and in Religious Sects" in the period 1956–1958. The "enemy contingent” is described by place of residence, and statistics are also provided.
After the description of specific "enemy manifestations" and the measures against them, the report on the Danovist sect writes: "In 1957 more than 50 tons of reactionary literature, written by author P. Danov throughout the country was seized, and a financial audit was made, the leadership of the Danovist sect will be obliged to pay to the state over 570,000 BGN of misused funds. The gold estate of the sect at the value of about BGN 30,000 discovered and seized." (p. 4) (The annual average salary in 1957 was 8,151 BGN.) In the operational report is noted that "the institution available is insufficient". The main task is the need to "recruit a force capable of undertaking the destruction [of the sects]" (p. 14).  The result of the financial audit of the Danovist sect is suggested to be used as an argument for the sect to be closed down as a 'faith community'." (p. 15) 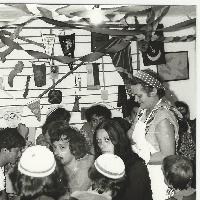 The totem wall was in a strict sense one of the most iconic objects of Bánk. Originally, it served as a clipboard, then gradually it became the totem wall, bearing various kinds of items (used during games) related to important or memorable events. The totem wall also functioned as a reminder by making the past visible to the participants. Initially, the display changed year to year (some of the items were lost), but after a while, it became an untouchable and stable object.