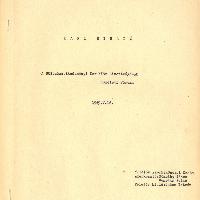 Könczöl, Csaba. Kari Híradó, 1969. Publication
Kari Híradó (Faculty News) was the periodical of the Faculty of Humanities of Loránd Eötvös University’s Communist Youth League Organization. The first issue was published on 16 May 1969. Csaba Könczöl, a member of the Eötvös College, was its founder and editor. Kari Híradó was the first oppositional political periodical since the Revolution in 1956 in Hungary. Its aim was the authentic orientation of the students, and its writers played an important role in the student movement of 1969. The periodical was censored at first, and finally prohibited in the autumn of 1969.
Citește mai mult 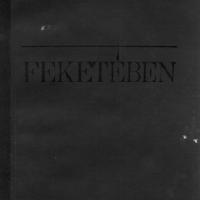 Kőszeg, Ferenc and Gabriella Lengyel, ed. In Black, 1982. Anthology
Encouraged by the surprising success of the charity auction of artworks held before Christmas of 1980, in the summer of 1981, literary editor Ferenc Kőszeg called for another SZETA (Hungarian Fund for Aiding the Poor) to organize a similar event again and to publish a non-censored anthology of works by contemporary Hungarian writers and visual artists entitled In Black (Feketében). The poems, stories, essays, and artworks were collected by Kőszeg and sociologist Gabriella Lengyel. All in all, it contained a valuable array of works by 38 writers and 21 artists, however the publication of the book took nearly two years due to some technical problems and repeated intervention by the police. In Black was printed in 300 copies for prominent intellectuals and well-to-do collectors of rare books, but two-thirds of the copies ended up the hands of the police. Still, the book launch “Down and Proud” was solemnly held at Kőszeg's apartment in February 1983, and the bibliophile samizdat anthology remained a reminder of social solidarity and cultural resistance during the last decade of communist Hungary.
Citește mai mult
51 - 52
«« pagina anterioară 1 ... 1 2 3 4 5 6 7 8 9 10 11