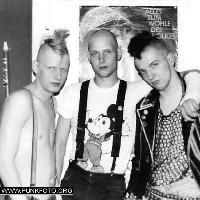 L'Attentat
L'Attentant was one of the most well-known punk bands in the GDR, being active from 1983 to 1989 in Leipzig. Previously, the band played under the names ‘Wutanfall’ (Tantrum) and ‘H.A.U.’ (Halbgewalkte Anarchistische Untergrundbewegung meaning half-felt anarchist underground movement). The original line-up included Maik Reichenbach (bass), Imad Abdul Majid (guitar) and Bernd Stracke (vocals). Stracke and Reichenbach were arrested (and deported to the Federal Republic of Germany). Majid had served as an unofficial collaborator for the Ministry for State Security.
Citește mai mult 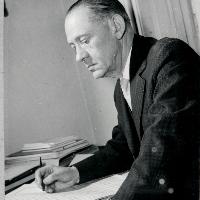 “Noah's Ark” was a research group founded in 1951 by László Lajtha (1892–1963), a Hungarian composer and researcher of folk music. Lajtha followed the methods of Béla Bartók and Zoltán Kodály. His research on folk music connected him to the Museum of Ethnography and the Ethnological Archives. His carried out his first fieldwork to collect folk music in 1910 and 1913. From 1913 until 1949 he worked in the Museum of Ethnography as a folk music collector and researcher. From 1947 to 1948 he lived and worked in London. He realized how radically the political system had changed upon his return to Hungary, and protested the new regime, and was thereby declassed. Lajtha hoped to emigrate in 1951, but the government forced him to stay in Hungary by denying him a passport. That same year he received the Kossuth Prize (the national award in arts and culture) and was offered work as a researcher. He organised his own research group, “Noah’s Ark”, which Lajtha used to employ others who were declassed. He and the other members of Noah’s Ark—like Zsuzsanna Erdélyi, Margit Tóth (a nun), Benjamin Rajeczky (a monk)—collected religious folk music, folk songs, and archaic prayers in socialist Hungary. The group’s research work was successful, and following the death of László Lajtha in 1963, Margit Tóth continued their work until her retirement in 1979. Thanks to their efforts, the Folk Music Collection of the Ethnological Archives was established. Their work was supported by the Ministry of Public Education.

The Lakitelek People’s College was established in 1991 by Sándor Lezsák and his wife on the basis of the Hungarian folk high school movement in the interwar period and the people’s colleges of Denmark. The aim of the Folk High School was to create communal experiences in the spirit of the Lakitelek Meetings, to cultivate and spread Hungarian folk-national and Christian values, to organize conferences about national policy, and to educate locals with a focus on practical skills. To reach these aims, the Lezsák couple established the Lakitelek Foundation in 1992, which was based on donations by former émigré Hungarians with several promoters and enterprises. Many important public figures gave lectures in the Folk High School, including for example Lech Walesa. Now the Folk High School is operating beside Lakitelek in a 4-hectare area. It has the Collection and Library of the Emigration and the Archive of the Regime Change, which contains more than 1,500 boxes of documents about the Hungarian regime change.

Citește mai mult
Landkreis Mecklenburgische Seenplatte
The county of Mecklenburgische Seenplatte was created from several independent counties, cities and towns, as well as the previously independent city of Neubrandenburg following the Regional District Reform of 2011. Measured by area, it is the largest county in all of Germany.
Citește mai mult
1 - 5
1 2 3 4 5 6 7 pagina următoare »»