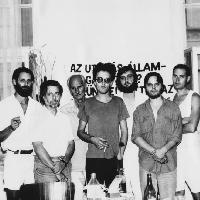 The exhibition entitled “A harcoló város/The Fighting City, 1986” was organized by the amateur artist group Inconnu to celebrate the 30th anniversary of the Hungarian Revolution of 1956. The police banned the event on the opening day and destroyed the artworks. However, before that, an agent took photos of the compositions. Thus, the secret police itself created, through the act of destruction, a group of sources which is today the single visual trace of the exhibition. This photo collection is kept in the Historical Archives of the Hungarian State  Security Forces (Állambiztonsági Szolgálatok Történeti Levéltára – ÁBTL).