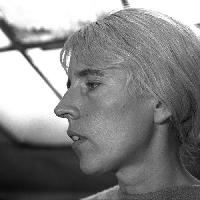 Šimotová, Adriena
Adriena Šimotová was a Czech painter, graphic designer and sculptor. She graduated from the Academy of Applied Arts in Prague. She was one of the artists associated with the UB 12 group. In 1953 she married her fellow student, the painter, illustrator and graphic designer Jiří John. Around the year 1970 she began creating work in the style of the “new figuration”. In the 1970s and 1980s she could only exhibit her work unofficially. She usually created her work using crushed, cut and torn paper and textiles. She used different techniques such as frottage, textile collage, printing and pigment drawing. The events from her life featured heavily in her work, such as the Second World War, the premature death of her husband, Jiří John (1972), and their son (1994). Adriena Šimotová’s work can be found in many national as well as international museums and galleries, including in the collection of the Georges Pompidou Centre Museum of Modern Art in Paris. In addition to art, Adriena Šimotová was also involved in literature. Her texts and poems from 1945–1997 were published in 1997 under the title “A Head for Browsing“.
Citește mai mult 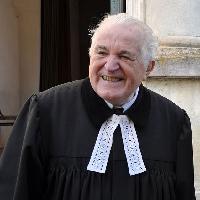 Jan Šimsa is a representative of the Christian-oriented dissent of Brno. He was born 2. 10. 1929 in Prague and after finishing high school he studied theology at the Comenius Theological Faculty and graduated in 1952. As a parish priest of the Evangelical Church of the Czech Brethren, he worked until the forced prohibition of pursuing a profession in 1973. In this period, just as Božena Komárková did, he sought the transformation of theological and the ideological foundations of their home church within the informal stream New Reconstruction. In the following years, he changed his profession, worked as an archivist, a handyman of church buildings, and after moving to Brno in 1975 as a manual labourer. Šimsa was a signatory of Charter 77 and in 1978, he was arrested and spent eight months in a jail. During normalization, he participated in the organization’s underground university´s lectures, publishing samizdat and leading informal ecumenical dialogs. After the Velvet Revolution he also worked on publishing Božena Komárková's writings after her death, which he kept with his wife Milena Šimsová on her estate, which was donated to the Moravian Museum in 2012. In 1991 Šimsa received the Order of T. G. Masaryk. He died 5. 4. 2016 in Brno. 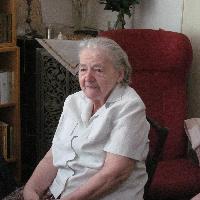 Milena Šimsová and her husband Jan Šimsa were representatives of the Protestant dissent in Brno. She was born on 5 October 1932 in Turčiansky Svätý Martin in Slovakia, but later moved to Brno. She graduated at Brno´s Faculty of Arts in 1956. Twelve years later, she also completed her doctoral studies there. Šimsová published several books, including a book about her father-in-law, a prominent representative of the Nazi resistance movement Jaroslav Šimsa: Svět Jana Šimsy a Úzkost a naděje: Dopisy sny, události let 1940–1945 (together with Jan Šimsa). At the time of normalisation, she cooperated with her husband in dissent activities, and also attended underground university lectures in Božena Komárková´s flat. In 2006 she was awarded the Prix Irene. 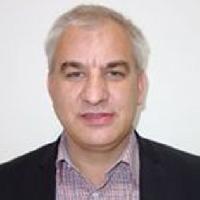 Šimulčík, Ján
Ján Šimulčík is founder of online collection of Slovak samizdat. Ján Šimulčík was active in religious activities before 1989 and after 1989 he researched and collected most of the Slovak catholic samizdat. He is also author of many books dealing with the topic of church in the Czechoslovak Socialist Republic (e.g. Zápas o svedomie [Fight for Conscience], Čas svitania [Time of Dawn], Zápas o nádej [Fight for Hope], Katolícka cirkev a nežná revolúcia 1989 [The Catholic Church and the Velvet Revolution 1989]) or about postcommunist history in general (e.g. Dokumenty doby [Documents of the time] 1990-2000).
In 2016 he with Marek Endel launched online collection of Slovak samizdat. Register contains 16 samizdat which are accessible in PDF format. Founders are still looking for missing samizdat (not just Catholic) to publish them and to improve the website for researchers as well.
Citește mai mult 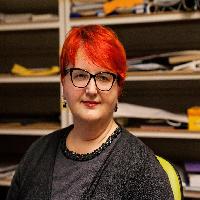 Breda Škrjanec is a museum advisor in charge of the Study Room and Collection at the International Centre of Graphic Arts. She is art historian and sociologist by education and training. She was one of the founders of the feminist group Lilit, which represented the beginning of the lesbian and women’s movement in Slovenia in the 1980s.