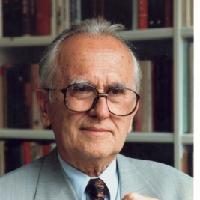 Zulfikarpašić, Adil
Adil Zulfikarpašić was born in the eastern Bosnian town of Foča in 1921. As a pupil, he joined the Communist Party of Yugoslavia. During the Second World War, the Ustasha (Croatian fascists) condemned him to death, but he managed to escape. After the Second World War, Adil Zulfikarpašić was the assistant of the Minister of Trade in the Government of the People's Republic of Bosnia and Herzegovina.
However, in 1946 he went into exile, first to Trieste (Italy), then to Rome and later to Innsbruck (Austria). In 1954 he moved to Switzerland. Adil Zulfikarpašić began his political struggles for Bosniak causes in Switzerland and was recognized as a prominent representative of the Bosniak diaspora.
Upon his return to Bosnia and Herzegovina, he participated in the pre-election campaign of the first multi-party elections in 1990. First, he was a member of the Party of Democratic Action, but after a disagreement with Alija Izetbegovic and with the leadership of the party, he became the leader of the Muslim Bosniak organization (MBO), along with Muhamed Filipovic and Fehim Nametak. One of the first disagreements between Izetbegović and Zulfikarpašić was over the name of the party: Zulfikarpašić insisted that the term Bosniak be included in the party's name. Unlike Izetbegović, Zulfikarpašić also wanted a more liberal political party. Adil Zulfikarpašić died in Sarajevo on 22 July 2008.
Citește mai mult
Zupan, Bojana

Bojana Zupan (PhD) was born in 1980. She is assistant at the Department of Psychology at Vassar College in New York. She is a granddaughter of Rudi Supek, daughter of Olga Supek. In 2005, as a legitimate heir, she donated her grandfather's archive to the Croatian State Archives in Zagreb.

Andrii Zvarun was director of the Smoloskyp publishing house during 1972-1992 and member of the Smoloskyp quarterly editorial board in 1978-1989. An activist of Ukrainian human rights movement in the US, he led the Washington Helsinki Guarantees for Ukraine Committee in 1976-1982, which was formed at the initiative of the Information Service of Smoloskyp. After World War II, Zvarun with his family moved from Soviet Ukraine to Germany and later to the US, where he got his degree in microbiology from Ohio University. In 1972, he joined Smoloskyp's human rights activities. He organized a series of protest campaigns against political repression in Soviet Ukraine, prepared Smoloskyp press releases, participated in international human rights conferences, including the first International Sakharov Hearing in Copenhagen. In 1977, he spoke on Ukrainian dissident movement and the Ukrainian Helsinki Human Rights Group at the US Congress. Zvarun managed to receive the majority of documents of the Ukrainian Helsinki Human Rights Group from the Group’s founder, Mykola Rudenko. The documents were later published by Smoloskyp.

Zvarun also took an active role in the campaign for liberating Nina Strokata, a repressed Ukrainian microbiologist and a founding member of the Ukrainian Helsinki Group. As a result of the campaign, Strokata was accepted for membership in the American Society for Microbiology that later helped her and her husband, Sviatoslav Karavanskyi, to emigrate to the US.

Zsuzsa Zádori works as an archivist at the Open Society Archives. She is responsible for the audio-visual materials, but she is also a curator for exhibitions and an organizer of film events. Her primary fields of interest are the Cold War, communism, and human rights.