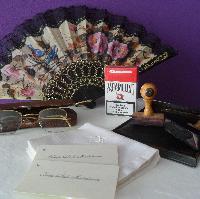 Oto Tasinato (1921-2011) was one of the first open homosexuals in Czechoslovakia before 1989. He performed dressed in women’s clothing under the pseudonym of Countess Mondschein, and in the 1990s, he was regarded as a legend of the Czechoslovak queer community. The apartment of Oto Tasinato was unfortunately very quickly cleared out after his death in 2011. When the Society for Queer Memory tried to acquired his personal estate or at least part of it, it was regrettably found that all relevant objects of the Tasinato estate had been thrown away and destroyed. All the Society succeeded in securing were humble belongings as his glasses, a hand fan, his last pack of cigarettes, handkerchiefs with a monogram, visiting cards, an stamps. Besides these few belongings the collection also contains an interview with Oto Tasinato and various photographs of his. 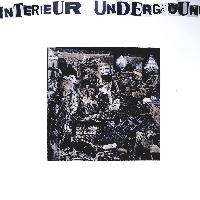 Interieur Underground
The idea for this exhibition space in the Museum of Lies in Radebeul was a result of critique on the state of the art concerning GDR artwork and its display in German museums. The aim of the exhibition is to showcase the rich collection and aesthetic language of its pieces, focusing on the artwork of GDR subcultures and avant-garde artists, but it also includes more iconoclastic installations that address the peaceful revolution.

The exhibition space displays objects and installations that were banned by the GDR regime. The room includes a great number of artworks created by Zabka before 1989. Objects displayed in the Interieur Underground room vary from installations to punk music, to self-printed postcards, to photography. The exhibition space should be understood along the narrative of the catalogue which includes stories of various GDR artists accompanied by visual material such as Stasi documentation, photography capturing the first graffiti on the eastern side of the Berlin Wall in 1989, among others. Topics covered include unconventional ideas about democratic movements, subcultures and underground activities in the GDR, and obviously censorship. The exhibition space can be seen as a historical overview of peripheral artists within an obsolete political system. The visitor has the opportunity to explore political change and upheavals with the help of the artist’s autobiographical objects.

The exhibition is accompanied by a catalogue, supported by the Federal Foundation for the Reappraisal of the SED Dictatorship and the Saxon Regional Representative for the Stasi Archives, which captures personal stories from the GDR artists, narrated with the help of personal objects. In addition, ten artistic posters were created for the exhibition room.
Citește mai mult
Interview No. 003 about the Jewish identity

At the time of the interview, the interviewee, a member of the intelligentsia from Budapest, was 26 years old. The conversation took place in 1984. Her parents hid their Jewish origins from her. The family followed the “strategy of silence,” as did the overwhelming majority of other families with Jewish origins. Her narrative reveals other typical features of these sort of families.

The interviewee has Transylvanian ancestors on her father’s side and relatives on her mother’s side living in Budapest. According to her, she knew nothing of her Jewish origins, the history of Jewish community, or the Holocaust until the age of 13. Her parents tried to forget their origins, and they never spoke of them with her.

The information came from outside of the family circle (this was by no means unusual). In her case, it was one of her friends who raised the subject: “When this boy told me this, it touched me deeply, but at the time I encountered Antisemitism only on the verbal level, but this time I had to face the fact that this was terrible and I am actually a descendant a persecuted race.”

The narrative includes the psychological techniques of aversion. These methods are examined in detail in Erős and Ehmann’ paper. The interviewee indicated that the word Jew was a source of anxiety for her, without a clear object. According to her experiences, young people in Jewish families were more distressed and less self-confident. The explanation for this lay in the fact that their parents passed on their own fears and the experiences of their persecution unintentionally with their gestures. The sense of the dichotomy of Jewish existence appeared in her narrative: to be a Jew to her meant a sense of security which roots from the notion of belonging to a community, but at the same time, it meant uncertainty and anxiety, which is intensified by the nightmare of possibly being persecuted in the future.

By referring to Erős and Ehmann’s interpretation, by the end of the discussion the interviewee arrived at a point from which she could continue her life. This framework of explanation gives a much more stable background than the notions of Jewish identity which pervaded the world around her: exclusion, persecution, and trauma. In the end, these concepts and memories can be verbalized and discussed.

This interview exemplified the process during which the strategy of silence becomes counterproductive. The parents of the interviewee did not tell her daughter of their origins. By failing to do this, instead of  sparing her from the conflicts and traumas they feared her Jewish origins might mean to her, they made these conflicts and traumas more difficult to address. (Erős, Ferenc, András Kovács, and Katalin Lévai. “Hogyan tudtam meg, hogy zsidó vagyok?” Medvetánc, no. 2-3 (1985), 129-144.)
Citește mai mult
Interview with Albertas Žilinskas

Interview with Albertas Žilinskas. The interview reveals the life of intellectuals in the late Soviet period. He speaks widely not only about connections and the networks among them, but also about the existence of different groups in the dissident movement, and critical attitudes towards each other. In the interview, he speaks about the appearance and dissemination of the samizdat journal Perspektyvos, which was read mostly by members of the intelligentsia. 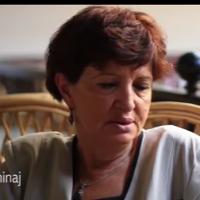 Drita (Luri) Vukshinaj was born in Prizren on 10 March, 1954.  She graduated from the Technical High School and worked as a floor manager at Progres, a synthetic fiber factory in Prizren. Coming from a non-openly political family, Vukshinaj is a great example to illustrate women’s voices. After injuring her leg at six-years old, there were no options offered to her in Kosovo at the time (1960) except for amputation. Her father, not wanting two women to travel alone, would not allow his wife to accompany Vukshinaj to Skopje to receive better care. When Vukshinaj turned thirteen, and found a treatment option in Belgrade, her father refused to allow her to stay alone at the Belgrade hospital for an extended period of time. When she threatened to jump from the second-floor window, he relented.  She managed to receive treatment from a hospital in Belgrade on her own, where she remained for a year despite her father’s hesitations, to be able to improve her walking. Vukshinaj’s father’s fear had less to do with ethnic hostility than with his perception of women as property, who were not permitted to leave the house without an escort.

For many adult women in Kosovo, it would have been enough to marry and have children. Though Vukshinaj did these things (She married Akik Vukshinaj, a former political prisoner and engineer, and had three daughters: Fjolla, Filloreta and Sheki), she also became a strong advocate for people with disabilities by working to mobilize patients and provide resources. With her NGO for people with disabilities in Kosovo, Drita Vukshinaj became a lifelong women’s rights and disability rights activist. Drita Vukshinaj died on 9 March, 2016.

KOHI interviewed Drita Vukshinaj on 27 July, 2012. The audio file is available in Albanian as well as the transcripts, which is also translated into English and Serbian. In this extract from the English translation of the transcript, Drita remembers her activist work for the disabled:

“I started working with women when I saw in the daily newspaper Rilindja, I think it was in 1994, that a Handikos office for people with disabilities had been opened in Prizren…I found out from the paper where the office was, and went there on my own. [...] At that time, there were 200 disabled persons registered as members. Very few of them were women; they were mostly men. Until after the war, after 1999, we had some activities, such as helping poor women — especially women in villages. We identified where this category of people lived.

In 1999, the office reopened and resumed its work, and so more humanitarian aid began to arrive after the war. At that time, it was a great surprise that […] all these disabled people suddenly appeared. I was one of those who went out day and night. I was out every day. I went out of town, everywhere, but I had never seen those people before. However, because of the humanitarian aid, people began to declare themselves disabled. We had personal contact with them, but I preferred to be with the women. I talked to them, maybe they were of different ages, 40, 50, 60 [sic] years old, and they were from the city, but I had not known or seen them before, and they said that their families did not let them go out of the house and into society. This motivated me to do even more for this group of people. We started registering them throughout the entire Municipality of Prizren, which had a total of 78 villages. Sometimes it happened that we would go to a house and a woman with disabilities lived right next door, but the family living next to her did not know it. So we would not find out unless the other family accepted us into their home. This was one of the greater difficulties that we had. It happened sometimes that we visited a place several times until we convinced the families that these women need to be out in society, needed to be integrated, needed to gain some skills.”
Citește mai mult
36 - 40
«« pagina anterioară 1 ... 2 3 4 5 6 7 8 9 10 11 12 pagina următoare »»