45 piese remarcabile descoperite
Număr de obiecte pe pagină:       «« pagina anterioară 1 2 3 4 5 6 7 8 9 pagina următoare »»
Forged issue, 1963
In France at the end of August 1963, around 300 to 500 copies of a fake issue (28 September) of Bosnian Views were distributed in A5 format including 9 pages of text.
The forgery of issue number 28 was identical to the original September issue in the number of pages and its headlines. The fake  issue however is characterized by poor print quality and therefore is relatively difficult to read. The first text that was signed as Z. bearing the title “On the occasion of the 500th anniversary of the conquest of Bosnia (1463-1963)”, in which the belief in the dogmas of Christianity is relativized and the reasons for the so-called “Good Bosniaks” converting to Islam presented in a rough way. The following text "What Muslims Must Know about Christianity" was signed with “Dr. Smail Balić”. In this text, the author undertakes a "scientific" discussion of the dogmas of the church, referring to the Gospels, the Qur'an, and the Hadith. It should be emphasized that at the end of the text, and in order to provide an illusion of the continuity of the editorial board, it is indicated that the content is going “to be continued”. The text also included the fake signature of “Dr. Selim Teskedzić (Tanja Nikšić)” under the heading “What Does Every Bosniak Need to Know?”, which attacks certain (real or fictitious) diaspora groups supporting the Croatian Peasant Party. In general, the fake issue took on an aggressive tone, full of propaganda, in which the texts supposedly signed by the editorial board were used try stir up Yugoslav diaspora and emigrant society.
Citește mai mult 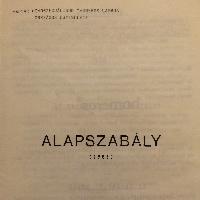 The founding documents of the Homérosz Society stated two important issues. Given the discriminative policies of the late socialist state, the only way to establish a homosexual association was to connect the recent phenomenon of AIDS as a public health issue to homosexuality, because, according to the foundational document, homosexuals were more promiscuous than heterosexuals.

After the foundation of Homérosz, referring to the Hungarian news agency (MTI), leading western news agencies (Reuters, AFP, EFE, dpa) reported on the event and represented it as a part of the Hungarian political transition.
Citește mai mult 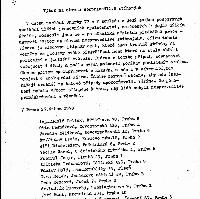 Founding statement of the Committee for the Defense of the Unjustly Prosecuted (VONS), 1978.

The founding statement of the Committee for the Defence of the Unjustly Prosecuted (VONS) of April 27th, 1978, signed by seventeen signatories on the Charter 77, who posted their addresses so that people could find them. VONS's goal was to track the cases of people who had been prosecuted or imprisoned for their opinions and beliefs or who had become victims of police and judicial arbitrariness. VONS, by means of numbered communications, familiarised the domestic and international public with these cases and asked the Czechoslovak authorities for remedy. They helped to provide legal representation and mediate financial assistance to the unjustly persecuted and imprisoned.

The impulse for the creation of VONS was, among other things, the events associated with the Railroad Ball in January 1978, in which the signatories of the Charter 77 wanted to attend to. However, three of them were detained by the state security. In support of them, the Defence Committee was formed by Václav Havel, Pavel Landovský and Jaroslav Kukal, who gathered documents for their defence and informed the Czech and foreign public about the whole case. The accusations were released after six weeks and the prosecution was halted. This was a great success for committee members and other dissidents, so VONS was founded in May 1978. 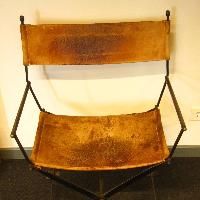 Four "Brecht Chairs"
A special exhibition piece in the Heiner Müller Archiv / Transitraum are four chairs designed by Karl von Appen in 1956 for Bertolt Brecht's production of the "Leben des Galilei" [Life of Galileus] at the Berlin Ensemble stage. In Müller's possession they were by no means used as just props or basic furniture. They were meaningful, because in Müller’s early years he had declared his dream to become a master student of Brecht (1898-1956). In his work, Müller his entire life was inspired and guided by Brecht's theatrical style. The fact that he came from the Berlin Volksbühne theatre, and in 1992 took over as director of the Berlin Ensemble, which had been founded by Brecht, should be viewed as a late homecoming and the fulfillment of his long held dream.
Citește mai mult 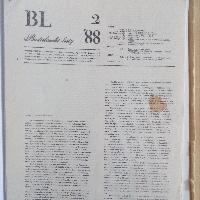 Front-page of the Bratislavské listy samizdat
Front-page of the second issue of Bratislava Papers from October 1988. The collection contains copies of all issues (5 issues). On every front page there was an editorial appeal and table of contents. Some contributors published under their real names, others under pseudonyms (on the photo: -el je-, V. D. etc.).
Citește mai mult
36 - 40
«« pagina anterioară 1 2 3 4 5 6 7 8 9 pagina următoare »»