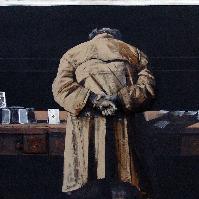 Urbanism, 1976
The picture shows a man with his back to the observer. He is leaning slightly forward over a scene representing an unsupported table on which stand several houses of cards that may fall down at any moment. One has already collapsed. The picture is a metaphor for the tragic fate and existence of the human being, his uncertain plight in the modern world, as well as a utopian view on socialist society. He gazes at the houses of cards as though trying to read his fate, his future. The artist himself may be recognised in the man’s depiction, hiding his face from the observer in a state of speechlessness given the forlorn and tragic image of modernity before him.
Citește mai mult 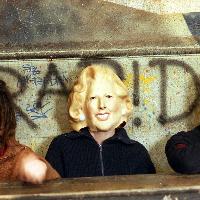 The former Black Hole (Fekete Lyuk) in Budapest had become a legend already in its first few years of existence as the most important underground nightclub of the transition period. The building in Golgota Street originally was a community center at the residential area for the workers of the Ganz-MÁVAG machine factory. After 1945, it was operating under the name Vörösmarty House of Culture (it was a kind of a “community center”) under the oversight of VASAS, the Hungarian Metalworkers’ Federation. The basement, which served as a community bath until 1969, was transformed into a center of contemporary alternative and independent music in just a few weeks in 1988. The Black Hole opened its gates relatively late, in February 1988: perhaps this could not have taken place at any other time. Club life in Budapest was just beginning to take root, and while the plans to open the place had been drawn up in 1985, permission was granted only in 1988, when the party-state eased the pressure it had been putting on this kind of undertaking. “Adult educator” (népművelő) Gyula Nagy, the leader of the community center, ran the place.

In the initial period, the target audience was primarily a narrow circle of young intellectuals, but when a frequented punk club in the working class district Kispest closed, the repertoire of the Black Hole expanded. The club became a kind of home to several subcultures: young intellectuals who sought ways of expressing dissent, path-seeking artists, punks, skinheads, and a variety of nonconformists mingled in the smoky basement. The performers were similarly diverse. The Hole provided a platform for all sorts of upcoming bands, which was extraordinary during an age of censorship and “blacklisted” performers. In this sense, the name alternative music center stood not for a single music genre, but for the diversity of the featured genres. Numerous bands started their careers at Black Hole, and some of them even managed to acquire national or international reputations. From Auróra to F.O. System to Pál utcai Fiúk, almost everybody performed at some point in Black Hole. The place remained popular in the first few years after the transition too: a diverse array of bands performed there, such as Kispál és a Borz and VHK. Foreign bands also came to perform at the club, such as No Means No, Chumbawamba, and Fugazzi. The club quickly acquired an international reputation. In 1989, the club was on Rolling Stones magazine’s list of the 50 best clubs of the world. The core members also edited a fanzine entitled Lyukság (Hole-ness), and the constant rehearsals were complemented with other cultural programs. In addition to film screenings, literary evenings, readings, and various performances, the club also served as a site for exhibitions. Later, a studio was added to the Hole, and the Voice of the Black Hole Cultural Association helped countless bands publish and distribute cassettes.

It was essential to the spirit of the club to reject all formalities, which was evident in the looks of the club. There was not attempt to change the labyrinth of the former community bath. On the contrary, during the process of renovation, the holes and cracks were either left in the walls or even deliberately emphasized. The walls were covered with graffiti, and there were very few pieces of furniture, and they were not of a particularly high quality. People could sit on the floor or on discarded train seats. The same principles applied to rules of politeness. People could casually dance on the table, pogo, or take a quick nap on the floor, and a passing sickness did not mean much of a problem either.  Prices were low and the opening hours were long. The place was tremendously popular, and with popularity came trouble. There were fights, drug use, and deviant behaviors. Nonetheless, Black Hole was a kind of home for many young people, and in this sense, the club was not the cause of these problems. It was a place where people could find refuge from their problems, and it was also a place where they could take their problems. In addition to the many cultural programs, the Black Hole also ran a drug monitoring program. Meanwhile, in 1989, the Faith Church held ceremonies in the community center right above Black Hole for six months.

The outsider nature of the club, both in terms of content and form, drew a considerable amount of attention. The night club was presented by the press as the “gates of hell” and a “rathole.” The reputation of Black Hole as a dangerous place spread rapidly. This negative presentation was a kind of advertisement for the club, and it was also a sign of softening. While police presence was constant, it consisted mostly of a single officer, László Kerti, who spend most of his time at Black Hole as a kind of “indoor major.” The club also had to maintain daily contact with the cultural department of the Budapest Police Headquarters. It had to submit the lyrics to the songs performed by the bands, and the files on the bands under observation (Sziámi, Európa Kiadó, Bizottság, and more) and their activities at the Black Hole grew. The very existence of Black Hole was in many ways a matter of sheer luck.

This spirit of this vibrant, unique, and sometimes frightening sphere was captured by Tamás Urbán, the well-known forensic and social documentary photographer. Urbán began taking photographs there at the request of Youth Magazine (Ifjúsági Magazin, IM) at the end of the 1980s. IM was the first periodical to publish a report on Black Hole legally, and Urbán took photographs there several times after that, not so much because of the music, but because of the atmosphere. Black Hole was connected to Urbán’s major topics in several ways, not just through the various subcultures and junkies, but also through personal relationships. His photo series offers portraits of the performing musicians and snapshots of the carefree parties, offering insights into an unrepeatable, unique sphere of the age.

After the transition, Black Hole remained open for another four years, but under the changed circumstances, it began to lose some of its significance. More and more nightclubs with similar profiles were opened, and the people who had frequented the club either dispersed or, as they grew older, their interests changed. The new wave lost its influence. The club also faced financial problems and an evolving conflict between the club manager and the director of the community house. After having been in operation for six years and have hosted almost 600 performers on its stage, Black Hole closed its doors in 1994. Several attempts were made to reopen it, but they all failed. Black Hole was part of a unique time and sphere, and it had a distinctive influence in part simply because of the historical context in which it functioned. It remains a subject of interest for the historian precisely because of its uniqueness. More recently, it was opened for guided tours on an occasional basis to let latecomers and nostalgic “survivors” travel back in time.
Citește mai mult 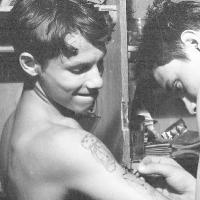 The Reformatory School in Aszód has undergone many changes since its foundation in 1884, and a lot has happened between its walls. The institution is still in operation today, having survived two world wars, the communist dictatorship, and even a tragic homicide. In 1973, Tamás Urbán took around 500 touching, shocking, and honest pictures about the lives of the residents of the reformatory school as his graduation project.

He was able to take photographs in the institution because he was working together with Youth Magazine (Ifjúsági Magazin), and he did not have face any particular challenges or have to deal with unusual complications while working on the project, though he visited the institution several times a week for two or three months. As Urbán sees it, this was because of his discrete style, especially when he did reports. He consciously avoided splurge, he brought only the most necessary equipment with him, and he did not force anything. As he recalled in 2015, “Suddenly I was in the community and everything came naturally.” He spent days among the residents, closely observing their everyday lives, including how they worked, played, and took drugs. Urbán maintained contact with a number of the residents of the institution even after he had finished the project. These letters, however, had to be smuggled out.

In 1975, Urbán’s first exhibition was held at the Reformatory School, and it featured the pictures he had taken there. The event was opened by Éva Keleti, one of Urbán’s teachers, but the plan to exhibit the pictures to a larger audience could not be realized: the authorities did not allow the photos to be taken from the institution because of their content. A representative of the ministry who was present for the opening ceremony made this decision clear. The pictures were impounded and the remained at the Reformatory School. While Éva Keleti and others tried to prevail on the authorities to change their decision – (even going as far as György Aczél in the process), they were not successful. Nevertheless, in 1978, Urbán brought this photo series to the first display of the Studio of Young Photographers. Despite the prohibitions, the photos brought him success, both from the audiences and in the profession. As Urbán recalls, because of this photo report, he was accepted into the Association of Hungarian Journalists. The photos taken at the Reformatory School are also the direct antecedents to his major topics of the 1980s: the photo series about prisoners and people on the margins of society, such as drug users.

The photos were recently found again under a broken piano in the Reformatory School by the educators at the institution. After more than forty years, on November 23, 2017, Tamás Urbán’s photo report was again exhibited in Aszód, this time with photos taken by his son, Ádám Urbán. The exhibition, which was entitled “Then and Now,” was opened by Éva Keleti, but this time the photos were not kept under the control of the state, and soon they will be exhibited outside the institution so larger audiences can also see them. While many things have changed since the transition, Urbán’s photographs have not lost their significance.
Citește mai mult
16 - 18
«« pagina anterioară 1 2 3 4