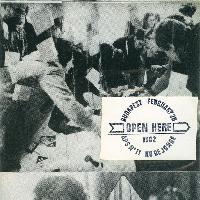 Everybody with Anybody, 1982. Book
The bookwork-catalogue documenting the first Hungarian rubberstamp action (Young Artists' Club, Budapest, 1982) with photographs, original rubberstamps, and texts explaining the event in Hungarian and English.
Citește mai mult

Everything Is Relative, 1976. Exhibition poster
Banned exhibition poster of István ef Zámbó, László fe Lugossy, and Kálmán Szentiványi. They planned a joint exhibition in the cellar gallery of the Vajda Lajos Studio entitled Everything is relative. The director of the Attila József Cultural House (to which the cellar gallery belonged in the official hierarchy) did not allow them to hold an exhibition with this title. According to the official explanation, is the title was misleading ("for example, Lenin's theories were not considered relative"). In the end, they changed the title to Relative and made another poster. Thus, they were able to hold the exhibition.
Citește mai mult 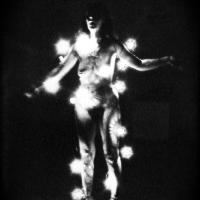 The photo presented Ewa Partum making her performance Stupid Woman in the Dziekanka Workshop, November 20, 1981. The performance was acknowledged as one of the essential pieces of women's art or even feminist art in Poland. Ewa Partum was one of the prominent female artists of the neo-avant-garde in the time of late socialism in Poland, alongside with Natalia LL, Maria Pinińska-Bereś, Izabella Gustowska, Teresa Murak, Zofia Kulik, and Barbara Konopka. Partum exercised the performativity of gender many times, conducting in her works deconstruction of the femininity and features associated with it. The question of gender and femininity was the subject of the Stupid Woman performance as well. On the picture taken by Tomasz Sikorski, naked Ewa Partum is performing with only chains of lights on her body. 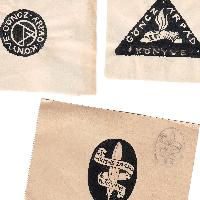 Ex libris versions designed by Árpád Göncz for his wife and for himself, early 1940s. Woodcut
Three woodcut ex libris prints designed by Árpád Göncz for his would-be wife, Zsuzsanna Göntér, and for himself, from the early 1940s.
These early personal relicts from the Family Collection of Árpád Göncz reflect the love of books and literature of a young couple, their traditional tastes, and the inventive talent of the graphic designer, who most likely was influenced by similar self-made decorations of the Hungarian boy scout movement, and the traditional typographers (Imre Kner, Károly Koós, Erdélyi Szépmíves Céh, etc.).

On the attached photos, some parts of the rich family library of the Göncz couple can be seen in the ex-president’s residence on Vérhalom Square, Budapest.
Citește mai mult 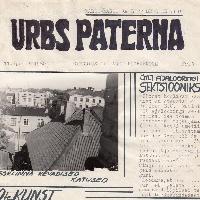 Example of the newspaper Urbs Paterna

Urbs Paterna was the manuscript newspaper compiled by activists from Noor-Tartu (Young-Tartu). Its first issue bore the name Kodulinna Teataja (Journal of the Hometown). Urbs Paterna was reproduced manually in a few copies, and not all issues have been preserved. These rare copies were passed from hand to hand. In this way, Noor-Tartu also avoided the censor.

This number is the third, and dates from 11 April 1980. This and other numbers do not contain any opposition content, only articles about culture, poetry, and discussions about the movement. It is not known whether the authorities reacted in any way to this issue, for at that time the movement could act relatively freely, and without major restrictions.

Like the entire collection, this particular copy of the newspaper belongs to the core group of Noor-Tartu. It has not attracted wider attention, which is the intention of the current holder of the collection. Only Indrek Riigor briefly mentioned the newspaper in his BA thesis. It is possible that it will be used for research after the collection is given to an institution.