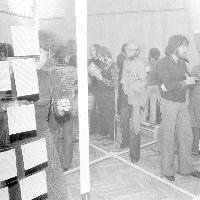 (The reconstruction of Robert Filliou’s Poipoidrom (1976) made in 1998, in the collection of the Museum of Fine Arts, Hungary)

The reconstruction was made after the Poipoidrom done by Robert Filliou and Joachim Pfeufer at the Young Artists’ Club (Fiatal Művészek Klubja) between September 7-17, 1976. The first version of the Poipoidrom was made by Filliou in 1975, while the idea itself origins from 1963. The title of the artwork comes from the greeting “poipoi” used by the ethnic group dogon people – referring to the relevance of communication. Robert Filliou identifies the Poipoidrom as the space of the creative act originnaly constructed of wood, strings, bottles and eggs, but can also be developed into an architectural complex.  Also called “the hallway of permanent creation,” the installation at the Young Artists’ Club was supplemented with photographs, texts and objects, serving as a model for common knowledge and communication. After the exhibition, the installation was given to the Museum of Fine Arts in Hungary as a deposit. Artpool initiated the restoration of the work on the occasion of the exhibition Installation Project at Artpool P60 in 1998. On this occasion, István Kántor (Monty Cantsin) performed in the reconstructed space of the Poipoidrom.

Film "Plastic Jesus"
“Plastic Jesus” (1971) stands as a masterpiece of the Lazar Stojanović collection and is one of the most famous cases of cultural opposition in socialist Yugoslavia. On the surface, the film has a simple plot depicting a strayed director (Tom Gotovac) in his attempt to make a movie while living at the expenses of his lovers. However, the film represents a scathing attack on the society of the time, invoking almost all taboos of the era – from the political to the sexual. Stojanović used archival material, showing original footage of Nazis, Chetniks and Ustashi via the so-called “Serbian cutting” style. This cutting juxtaposed the freethinking and anarchistic protagonist with the totalitarian practices of Nazism and socialism, comparing them in the process. A sharp albeit indirect, satire of Josip Broz Tito rests at the heart of the film, encapsulated in the depiction of two characters – one at the top (Tito) and the other one at the bottom (Tom Gotovac). For the Yugoslav censors the manner in which the figure of Tito was used in the movie represented not only an open attack on the image and work of the head of state, but also an assault on the entire system.
The film was Stojanović’s graduate final project at the Academy for Theatre, Film, Radio and Television with the state-owned „Centar FRZ” producing the work. While being prepared for cinema and festival screenings, it received the attention of censors in 1972. As a consequence, the movie was banned before any public screening and led to Stojanović being brought to trial. The film remained banned until the end of 1990 in Yugoslavia, when it was eventually screened in Belgrade for the first time for a total of four months. In 1991, “Plastic Jesus” received the FIPRESCI award at the Montreal film festival. At present, in ex-Yugoslav societies the work is not well known although Stojanović is not alarmed by this, rather seeing the importance of the movie as much greater outside of ex-Yugoslavia. He screened the film several times at foreign, primarily American universities (Columbia and Stanford), where he also has held lectures. The movie was screened in the MoMA for seven days in 2016. For this occassion, the Yugoslav Film Archive produced a remasterd version.
Citește mai mult
Film Notation with Donald Tusk

Donald Tusk is a Polish politician who was engaged in "Solidarity" movement from its beginnings. During his studies at the University of Gdansk he co-organised Students' Solidarity Committee, which was a reaction to the murder of Stanislaw Pyjas by Security Services. After the strikes broke in Gdansk Shipyard in August 1980, he was one of the founders of the Independent Students’ Union. Tusk's activities in the early 1980s focused on copying and disseminating illegal press and literature. He was also engaged in organising help for people oppressed by the regime, especially students. Later he worked as a journalist in several newspapers related to "Solidarity". After 1989 he became an active politician and was regularly chosen to the Parliament, where he held the highest functions. Between 2003-2014 he was the chairman of the Civic Platform party and between 2007-2014 the Prime Minister of Poland. Since 2014 he has been acting as the President of the European Council of European Union.

Film Notation with Donald Tusk focuses on his everyday life and oppositional activities in the 1980s in Gdansk, especially on his work in the Altitude Service Cooperative "Swietlik", which was an organisation founded in 1983 by a group of students - activists from the Independent Students’ Union, gathered students in order to help them make money, what was often problematic in socialist economics. The organisation gathered young intellectuals, activists and Alpinists. In his Notation Tusk speaks about his experiences of being a part of such colourful group. He describes the influence of "Swietlik" on his later life.

The Film Notation of Donald Tusk was used in a documentary about he Altitude Service Cooperative "Swietlik" produced in 2010.

Halina Winiarska-Kiszkis, born in 1933, has been a theatre actress since 1953. During her long career she cooperated with the best Polish Theatres, e.g. in Nowa Huta, Zielona Gora, Rzeszow. Between 1966-2003 she worked in Wybrzeze Theatre in Gdansk. When the strikes broke in the Gdansk Shipyard in August 1980 she openly endorsed the protesters with her colleague actors. Soon they formed their own "Solidarity" union in the theatre. With other cultural workers she co-organised the occupation of the Provincial Office of Gdansk.

After the introduction of martial law on 13 December 1981 she was immediately arrested and kept in the internment camp in Strzebielinek, Bydgoszcz-Fordona and Goldap. After being released she still continued her oppositional activity, mainly in the field of culture, e.g. she co-organised the Weeks of Christian Culture in Gdansk's churches. In free Poland she was rewarded with many several distinctions (like "Gloria Artis" Silver Medal).

In the Notation Halina Winiarska-Kiszkis speaks about the time she spent in the internment camp. She shares her emotions and experiences of being humiliated. However, she also describes the prisoners' strategies of resistance, like mocking the guards and disobeying their orders.

Film Notation with Halina Winiarska-Kiszkis is a part of the first edition of a project "Solidarity. What is left" conducted by the European Solidarity Centre in Gdansk (with technical support of Video Studio Gdansk and financial donation from the National Centre for Culture, through the "Patriotism of Tomorrow" programme). In the same edition Halina's husband, Jerzy Kiszkis - also an actor, cultural activist, and dissident - was interviewed. Since 2008 there has been VII editions of the "Solidarity. What is left" initiative.

Henryka Dobosz-Kinaszewska, born in 1940, is a Polish journalist and film-maker. In 1962 she started working in a publishing house, but soon chose journalism as her career path. Through the 1960s and 1970s she worked in several Polish newspapers, focusing on cultural issues in her writing.

In August 1980 she joined the protests of the Gdansk Shipyard workers and, along with almost 50 other writers, she signed the statement of Polish journalists endorsing the strike (the working version of this documents is now an exhibit at the European Solidarity Centre). During the martial law she engaged in creating and disseminating underground press and grey literature, which she also edited. After 1989 she continued her journalist career. Moreover, in the 1990s she became involved in the film-making environment. Acting as a director and screenwriter she created several documentaries, mostly focused on political and social activists (e.g. Stanisław Barańczuk and Lech Bądkowski).

In 1983 her family was dragged into the intrigue of Secret Services directed to discredit Karol Wojtyla (the Pope John Paul II). Wojtyla was a long-time friend of Henryka's husband's ,Adam Kinaszewski's, family. Because Adam was raised without a father, the regime's media started the rumour, which claimed that Wojtyla is in fact his father. The information was easily denied and proved to be just a weak attempt of Secret Services to undermine the Pope's authority among Poles.

In the Notation Henryka Dobosz-Kinaszewska shares her personal experiences. Her narration shows a lot of humour, which seemed to help her in the hardest times of the martial law. She also describes her own "dissident awakening": she states that in consequence of her own experiences from 1981 (e.g. arrest of her husband Adam Kinaszewski and her daughter's fear) she started to recognise patriotic feelings and to understand the sense of oppositional activity.

Film Notation with Henryka Dobosz-Kinaszewska is a part of the first edition of a project "Solidarity. What is left" conducted by the European Solidarity Centre in Gdansk (with technical support of Video Studio Gdansk and financial donation from the National Centre for Culture, through the "Patriotism of Tomorrow" programme). Since 2008 there has been VII editions of the "Solidarity. What is left" initiative.