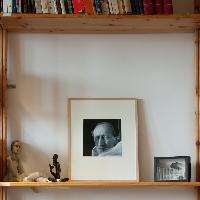 Heiner Müller Archive / Transitroom
Heiner Müller was one of the most important German dramatists of the 20th century. After his drama Die Umsiedlerin (The Resettler Woman) was censored in 1961, following a single performance, many of his plays prohibited in the GDR were staged in the West. The core of the constantly expanding Heiner-Müller-Archiv / Transitraum is Müller's personal library. While Müller's manuscripts are kept at the Academy of Arts, his library constitutes a separate collection run by the Institute for German Literature at the Humboldt-University of Berlin.
Citește mai mult 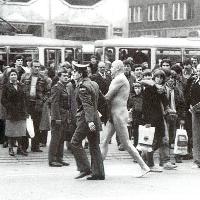 The collection of photographs by Croatian conceptual artist Tomislav Gotovac presents four performances (Reading the Newspapers, Listening to the Radio, Watching Television and Telephoning) from the 1980 and 1981 in which the artist awaited the death of Yugoslavian President Josip Broz Tito, thus underscoring the social and media psychosis of that moment. The work used a subversive strategy by which the artist indirectly drew the public and socialist regime into the performance, leaving them to think: what is the artist showing?